A MESSAGE FROM A HERMIT

"You English have served man very well with your intellect, giving him many things he needs, the solutions of many problems that have made life easier for everyone. Now you should do another work: to understand and to tell the world of the inner truth, the truth of the heart, as well."
[Elder Paisios speaking to Robin Amis; Mount Athos]

"The dayspring from the East has visited us on high."
[Elder Paisios - 'With Pain and Love for contemporary man.' p78]

"Those who acquire sanctity bring salvation to other people around them." [Elder Paisious]

I once knew an 'elder' - a Christian hermit in his cottage on Mount Athos - and he was known to understand the faith in his 'heart', in the way the early saints knew it, and he gave me a message for the English-speaking world; his message was made necessary because today most of us understand our Christian faith in a way very different from how the saints of the first few centuries understood it.

The first time I met one of these inaccessible elders, in his hermitage on Mount Athos, he gave me a message for the English-speaking world; a message made necessary because today most of us understand our Christian faith in a way very different from how he understood it.
Let me begin from something that may be familiar to a few of my readers.  I was speaking about the same hermit when I wrote about this before, in my book A Different Christianity.   He had paused to allow me to prepare for what he had to say.  We were sitting in his simple cell among the wooded slopes of Mount Athos as he continued, "You English have served man very well with your intellect, giving him many things he needs, the solutions of many problems that have made life easier for everyone."
He paused to let the young interpreter render his words to me, then continued, and as he did so I looked around the room.  Benches made of simple planks lined two sides, those nearest the cast-iron stove softened by folded blankets; an iron bedstead was on a third side, and the iron stove on the fourth.  The interpreter continued to repeat the hermit's message - as I shall do here.  He continued:  "Now you should do another work: to understand and to tell the world of the inner truth, the truth of the heart, as well."
The conversation continued for some time after that, but everything that was said was overshadowed by the enormity of the message, the impossibility of ever fulfilling this c 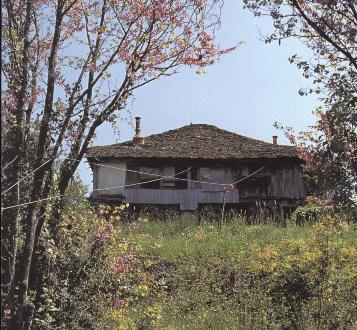 harge.
The question, of course, came directly from that 'truth of the heart'.  People happily talk about the heart, but when you ask someone something specific about this 'heart', they become suddenly silent, especially if you are talking about the heart of the psyche, and not about the physical body.   And in 1983, when this conversation actually happened, on the second of my many visits to Mount Athos, when I walked off into the mountain pastures to speak with this truly spiritual Christian hermit, a man known there as a 'pneumaticos' - the Greek Church's word for 'a man of the Spirit' - their term for such an 'elder', at that time the meaning of this concept was even less clear than it would have been today.  When he gave me this message, he expressly told me I should pass it on to the English.  Put baldly, as it was given, his words have until now proved so difficult for me to convey that the task continues to the present day.  This is because as a message it only makes sense to somebody who knows the complete picture - not only the inner or psychological facts, but also how these relate to the conclusions too easily drawn by eye and ear alone.  I'll be honest; before I could pass on this message, it has taken me a long time to know what to say, so I have been slow to pass it on.
The problem is that in the way the early Church would have seen it, and despite our belief in our 'progressive world view', perhaps to a greater degree even than was true then, modern man is described as fallen man, made in the image of the biblical Adam.  We are fallen psychologically, even if in the simple sense that the faculties and qualities which we were given at our birth have not all been fully developed.  But we can also overcome our fallen condition, and that was the message the hermit gave me to pass on.